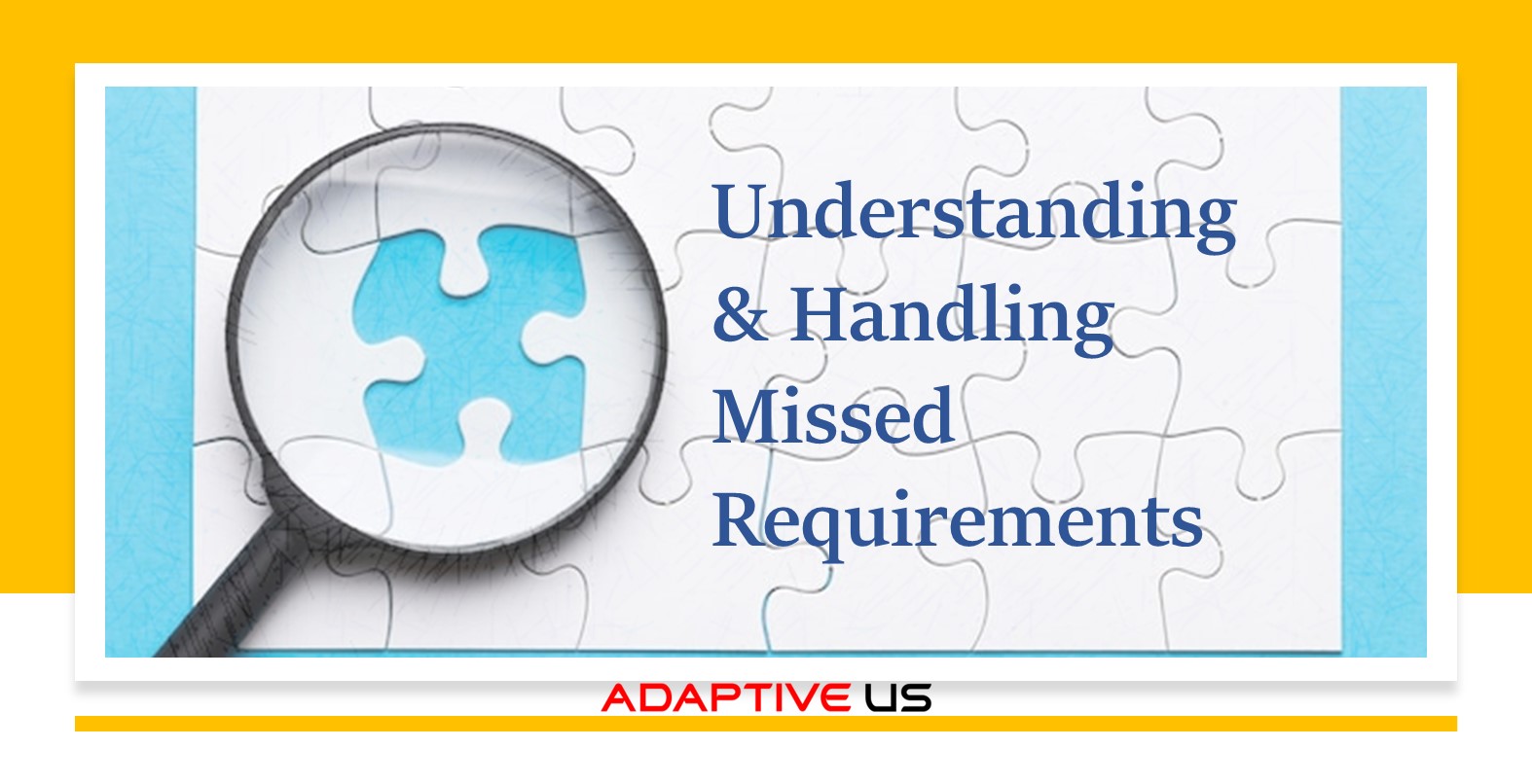 In this article, I would like to share my experience regarding the various scenarios of handling a missed requirement.

We may face this scenario at any phase of a project. The following steps will assist in identifying the difference between missed requirements and change requests at the first level –

Step 1: Identify if the new requirement falls within the scope.

Step 1a. If yes, does the endpoint of the requirement exist in the current requirements?

Step 1b: If no, at which point in the scope does the requirement make the process extend beyond the scope.

Going in the direction of the change request:

If “Step 1b” is true, we can term that the new requirement should be taken in the direction of change request analysis.

Going in the direction of missed requirement:

Step1a.1: Look for an existing requirement that has a similar endpoint.

Step 1a.2: Highlight the processes of both the existing and new requirements as different swim lanes within the overall process.

Step 1a.3: Look for similarities and differences between them with respect to the user, variables and constants, external factors affecting the process, the effect of transition requirement, if any, and the effect on non-functional requirements of the system involved.

Some of the observational output after the above step: -

Output 1: If the new requirement seems repetitive and adds no value to the system, then the above can be explained to the stakeholder, and the requirement can be ignored.

Output 2: f the new requirement is hardly repetitive but adds value to the system or user in some form, then we need to analyze further the reason for not bringing this up during the requirement phase.

Some of the major reasons for the occurrence of output 2 –

Reason 1: New requirement would be a part of the nice-to-have requirement:

Most recommended techniques to be used for the above mitigation: Prioritization, backlog management, and Functional decomposition to a detailed extent, and then mark the nice-to-haves at various levels

Reason 2: New requirement pops up after the change request sign-off:

Ways to mitigate: We have to do a complete analysis of the effect of the change request, such that we have no grey area left. Because missed requirements crop up from these grey areas only.

Reason 3: Change of stakeholders from the client-side:

Ways to mitigate: Understand the various powers of stakeholders and include all the mandatory stakeholders in the requirement phase so that the above effect can be minimized.

Most recommended techniques to be used for the above mitigation: Organization modelling, roles and permission matrix, and complete stakeholder list.

Sometimes, due to the lack of knowledge of the associated system, BA might miss certain inter-related requirement, which involves more than one system. In this case, this is a missed requirement.

Ways to mitigate: We have to do a complete research of all the allied systems, at least at those points at which those allied systems interact with the system at hand.

Most recommended techniques to be used for the above mitigation: Interface analysis, prototyping, data flow diagram, process modelling, analyzing transition requirements, and non-functional requirements in relation to the system at hand.

In a nutshell, all the above could be mitigated if we do a self-reflection about the techniques used for requirement analysis in two ways – One is to see if there were any mistakes in following the technique, and another way is to see if adding some other technique for the analysis would lead to complete requirement gathering phase (this depends on the system).