10 Things that can Sabotage Your Career | Adaptive US Inc. 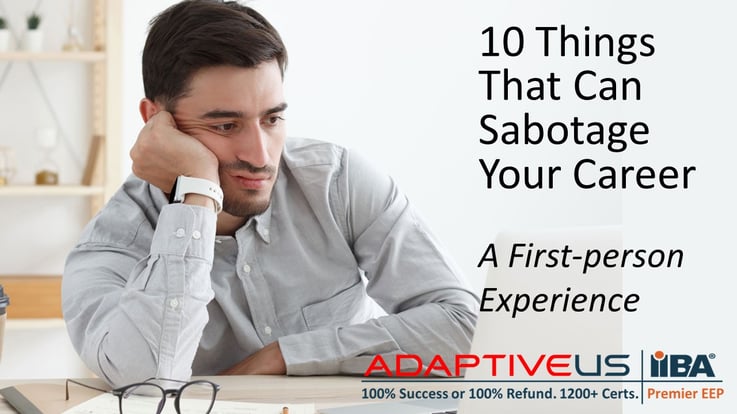 I have been a part of corporate life and independent consultant's life for more than a quarter-century. I have encountered several instances where I have seen professionals sabotaging their careers. Sometimes that activity they might have done may seem very trivial, but it damaged their careers irreparably. Sometimes it leads to dismissal from the job and the end of a fabulous professional career. I am narrating 10 incidents that I came across in my professional career. They are actual incidents I observed in my workplace or at a client's workplace.

One important thing that professionals forget is that the information they receive as part of a company is confidential. For example, one team member disclosed such confidential information in a social media forum to get some social brownies, leading to his dismissal from the company.

Sometimes posting inappropriate posts inside the company chat rooms can lead to dismissal. I clearly remember an incident when one employee posted a house for rent in which he casually mentioned that the house owner had a good-looking daughter. This particular comment was liked by a few other employees as well. All the employees were asked to resign for violating the company norms on inappropriate behavior in the official forum.

Often many staff members pay for personal expenses on the company's account. There was a widely reported incident about a very senior executive in SAP who was asked to leave the organization. Sometimes companies will enforce policies to set an example; even a minor transgression can result in dismissal.

Another case that I remember was widely discussed in public media as well. A senior executive entered into a personal relationship with a couple of colleagues during his career. This resulted in a situation where he was asked to leave the organization on both occasions. Once as the head of the largest vertical of the company and the second time as a CEO of a 10,000+ employees organization. This professional could have become the CEO of an ultra-large multi-billion dollar organization today, given his incredible professional accomplishments.

#5 Being completely inflexible with respect to one's work location

Many a time, professionals are extremely inflexible with respect to the type of work or our work location. I had to forgo an excellent opportunity to work in an upcoming center that could have taken my career to much greater heights, as I was inflexible about the locational change.

There are some instances where I have seen people are inflexible to learning new or similar domains. So, many times, we kind of iron cast our career path, and if things don't move in the correct direction, we are not willing to look at alternate routes to move ahead.

#7 Not appearing for any new job interviews

Another aspect I have observed with many professionals is that they do not appear for any new job interviews for a very long time. So, they start becoming vary of going for job interviews, or they may perceive that there is no need to go for new job interviews as they are quite happy and contented with the current job. One does not get exposed to the changing market scenarios unless one explores. Certain situations in your organization might make your role redundant, making it harder for you to find a new job.

#8 Picking up a job just for a higher salary

Another sad example I remember is about a good friend of mine. He was a bit unhappy about how he was treated in his organization and wanted to join another organization for a 30% higher salary. But the new organization's culture was very different from the old organization. He found it very hard to fit in there and had no network in the new organization. As a result, he was asked to leave that organization within 3 months; to my knowledge, he could not get another job for the next 3 years.

#9 Not reading signs on the radar – Poor company performance

Then often, employees also miss out on very obvious signs on the company's radar. For example, it may so happen that the organization decides to close down a particular unit. So not paying attention to the overall health of the organization, one may sabotage one's professional carrier.

#10 Not keeping oneself updated

The last thing I would like to point out is that many professionals become very comfortable in their jobs. They don't keep themselves updated with the latest subjects or technologies. Knowledge or experiences gathered has a great probability of becoming obsolete over a period of time. Often, the salary expectations increase significantly due to the number of years of experience in the workforce. Many find it extremely difficult to accept a job that could pay a little less but may be in the new sector. So one should benchmark one's skills periodically, preferably at least once a year, to see how one's skills fit into the new skills demanded by the industry. One of the easiest ways to keep oneself updated is to go for some training and certification because those would ensure that you are learning new things.

What have been your experiences about aspects one should avoid in one's career?