Why a proposed stakeholder map is better than the conventional one?

How often have you thought, can we make a better stakeholder map than what most textbooks suggest, including standards?

I remember a very interesting statement from a company which I admired.

The company name is Hewlett Packard, and they used to have a tagline in the past which said, "There is always a better way." I fully believe in this statement. I believe, whatever we are trying to do today, we can always make something better tomorrow.

So let's take a look at the existing stakeholder map.

As you all know, a map is something that guides you to move from one place to another. The stakeholder map, in this case, tells us how we manage our different stakeholders.

Most of you would have seen this conventional stakeholder map with two dimensions, a popular two-by-two matrix. On one side, you have 'influence' on the Y-axis, and on the X-axis, you have 'impact'.

The remaining quadrants can be named two, three, and four. Typically, the one termed 4 is the stakeholder group that has neither very high influence nor are they impacted significantly. So they are not going to be an important group.

The one I have numbered as 2 are those stakeholder groups who have high influence even though they have low impact. So we need to engage a little bit more with these people.

The same is true for the group of stakeholders numbered 3. This group has low influence but has a high impact. Of course, I could have given two to both of these quadrants, but for ordering perspective, I called them 1, 2, 3, and 4.

The problem with this particular stakeholder map is that we are grouping two very different stakeholders into one category. This can be better explained with the help of another (little better) stakeholder map. 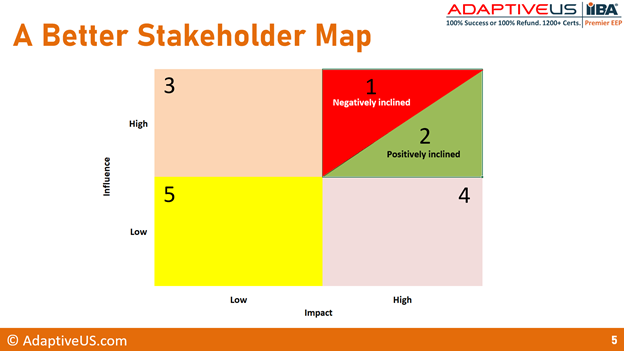 There can be stakeholders who don't like the change, which may be due to several reasons. For example, they might not have a good personal equation with the sponsor, or there might be organizational politics. It might even be that they are not convinced that the change proposed is the right thing to do.

So, there can be many reasons why a set of stakeholders can be negatively inclined towards the change. Let me give you a personal experience we encountered as a project team.

I was the change management consultant for this particular project, where the company had initially given the project to a large consulting firm, among the top four in the world. But unfortunately, the project did not go very well. Midway through the project, the sponsor removed the consulting firm from the project because the costs were ballooning. Instead, they took the company I worked for as the implementation partner.

It's probably something the sponsor was forced to do because he had no other option.

But many stakeholders simply did not believe that we were the right partner to implement the project. And they started creating a lot of trouble for us.

To get the work done, we had to do a lot of background maneuvering and things such as making the sponsor talk to this group of stakeholders and calm down the staff.

I encountered a similar situation in another project where we were trying to privatize a government entity. In this case, too, we encountered several stakeholders who were personally being negatively affected by the change.

It is obvious that a lot of government officials would never like to become private employees. So they openly opposed the project. They went on strike, went to the courts, and tried to get a stay order to stop the privatization. So all kinds of things happened.

Remarkably, one of my senior colleagues could actually manage the whole situation, but it was probably something out of the book. So I don't want to talk about it. But ultimately, we were successful with this project too.

Therefore the stakeholder group coming under number one is the group you should worry about most. Then, of course, you can look at two, three, four, and five.

We have five categories in this new stakeholder map instead of the earlier four, one specially dedicated for the negatively inclined stakeholder groups.

Here are a few suggestions that I can think of based on my experiences.

One, please understand the reason behind the opposition. What is it affecting? Is it their role/position at stake, their job, authority, or lack of confidence?

It could be anything that is affecting their opposition.

First, it is advisable to do things in a pilot mode rather than going all out and failing.

Second, instead of working with a very large number of stakeholders or groups, try to work with a simpler or smaller set of stakeholders and make it a success before you roll it out to the bigger group.

Third, always seek support from strong or positive influencers because these people already support the project. So if you can garner their support, it will be very valuable for the project's success.

If you have any questions or suggestions, please do reach out to us @ Info@AdaptiveUS.com.